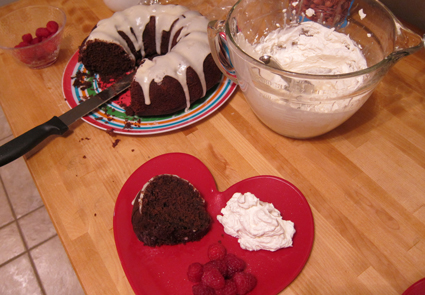 This was the dessert I prepared on Sunday: Chocolate-Buttermilk Bundt Cake with Arctic White Icing, fresh whipped cream with vanilla sugar, and fresh red raspberries. All of this followed my semi-legendary Chicken Parmesan. You can see why I only go crazy making this particular dinner once a year. 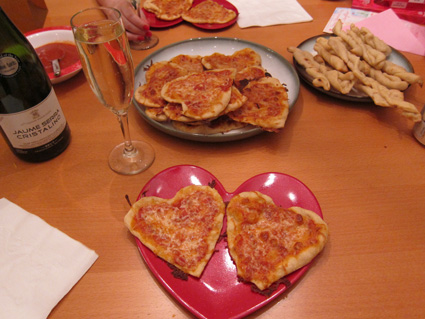 Tonight, I came home to see that Lisa made these heart-shaped pizzas, which she served along with a bottle of Cristalino Brut (the wine we served at our wedding).

A couple shots of the legendary cheeseburger spot in Chicago, the Billy Goat Tavern on Lower Michigan Avenue. 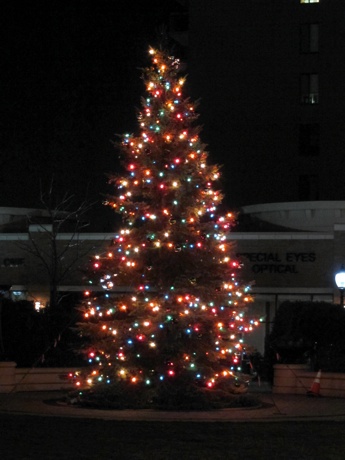 This tree is standing in Arlington Heights’ Harmony Park as I write this.

On Christmas Eve, Lisa and I were leaving our Melancholy Tavern and we came across a mother-and-son team near the tree, and we offered to take their picture.  It turns out they had donated the tree to the village– they planted it in their front yard twenty-something years ago, and now it was fulfilling the lady’s dream of being decorated for Christmas in a spot where everyone could see it.

We shared “Merry Christmases” and we were each on our way.

It was a very nice chance meeting for a Christmas Eve.

We spent a couple days in downtown Chicago, going “off the grid” and spending some quality holiday time together.

Here are some shots of State Street, Marina City, and the Wrigley Building that were taken late on Monday night.  I especially like the Christmas lights on the balconies at Marina City. 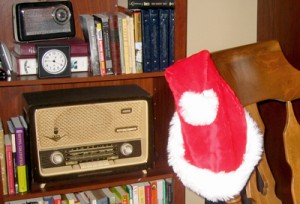 Here’s an early Christmas present for all of you: a pair of archive files that each contain 90 minutes of somewhat innocuous holiday music.  The real bonus, though, is hidden in the recordings:  between the usual bits of Nat King Cole, Kenny G, and 101 Strings are little snippets of Chicago media history.

These are recordings of two Chicago radio stations’ nonstop Christmas music programming, recorded on Christmas Eves in 1984 and 1988.    In those days, some radio stations would put their normal programming on hold on December 24 and play holiday music through to the evening of the 25th.  This way you’d have a nice musical background to whatever festivities you had going on.  (This contrasts with the more recent approach of going all-holiday the week after Halloween.)

While digging around the house for holiday music, I found a cache of cassettes that contained all sorts of fun that I pulled from the air over the years.  The two 90-minute programs attached below are from WLOO (FM100) recorded in 1984, and WNUA in 1988.   ﻿

FM100 was the primary Beautiful Music station in Chicago (under its various ownerships) from the early 1950s through the late 1980s, and their format consisted of soft instrumental versions of pop songs with the occasional light vocal.  The attached recording is very typical of what FM100 sounded like– just replace the Christmas tunes with non-holiday songs by the same artists.  You’ll also hear a couple of weather forecasts, and learn how it was a very cold night that Christmas Eve.

WNUA was a Smooth Jazz station from the late 1980s through the late 2000s.  It’s not coincidental that FM100’s demise came around the time of WNUA’s rise: they both served the purpose of providing background music.  Beautiful Music formats were being dropped all over the country at that time, and WNUA’s brand of “Smooth Rock, Smooth Jazz” was just a little more hip and rhythmic (and less sleep-inducing).   The recording presented here isn’t quite representative of the typical WNUA broadcast day: they went a lot softer here, plus they interspersed audio snippets by on- and off-air staff and their families.  They also included station jingles that sound like ringing bells, with a little “hourly chime” effect at the top of each hour. You still get Kenny G, though.

Just download each file, unzip, and load the resulting MP3s into your favorite music player.  There are two MP3s in each archive.

(FM100 image from the Radio Timeline at Zecom Communications.)

Download and enjoy– and maybe you’ll blow the mind of someone who actually remembers these stations.